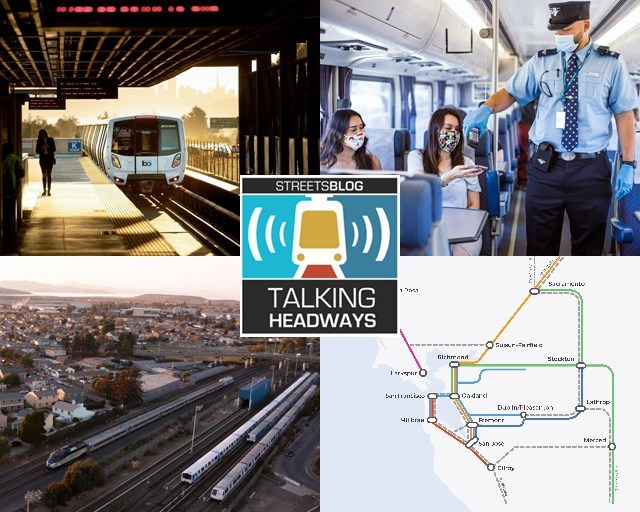 This week, we’re joined by Sadie Graham, BART Program Director for Link21, a rail network planning program for the San Francisco Bay Area. Graham chats about planning for a second bay crossing and the potential for a suite of projects to improve regional connectivity. We also talk about the frustrations of long term capital projects including politics, costs, and getting it done before you retire.

For those of you who prefer to use your eyes rather than your ears, there’s a partial transcript below the audio player:

Jeff Wood: Looking at a map of the region, it’s such a large geography, but there’s such a small sliver where the project might go; I mean you’re not going to tunnel from San Francisco directly to Sacramento, so it’s interesting to think about why the geography is so large in that discussion.

Sadie Graham: Link 21 is really a program of projects. So the program really will build upon and transform the existing passenger rail network. It will make it more integrated, right? So there will be more connections. And right now there aren’t many great connections between BART and regional rail. So that program will have sort of multiple projects. The first one of which will be a crossing and sort of the supportive ancillary projects that will be needed to do that. But we see this as more of a suite of projects that will sort of end with an integrated network of passenger rail.

Jeff Wood: That’s a really good point because I think the project everyone is going to talk about is that crossing, but there is a need for a network or system of transit expansion in the Bay Area that will impact the way people get around, especially since the system we have now is, in comparison with many other regions, Paris, London, Hong Kong, and those types, it’s somewhat limited. So if we start to think about these larger projects, it starts to be a bigger discussion than just a crossing.

Sadie Graham: Yeah and if that crossing is serving regional rail, the regional rail connection already goes beyond the six-county Bay Area of what BART serves. So it’s linking those things and not just at that crossing point. There will likely be other hubs where these different rail services connect, possibly new alignments so we’re really looking at that overall program to understand what the needs are, what the potential is, what we want to serve and through that we’ll develop an alternative that has the right crossing that will help enable that network. It’s a lot of really plannerly talk. I get it.

Jeff Wood: This is a plannerly podcast (I like that). I think one of the worries that I had, even coming into this discussion is that I’m grumpy about a second crossing, not because I don’t want one and not because I haven’t drawn one on a map (when I made my crayon maps as the crayonistas call it). It would be a super benefit and you can get into the weeds about the gauges and whether it’s going to be standard or BART gauge etc. But I’m also just frustrated by how long it takes to get stuff done.

I mean here in San Francisco we have the Central Subway. Obviously, that was not a preferred project for many transit advocates, but it was a political deal that got done. That’s taken forever and it’s still not open yet and I’m looking at that 2040 timeline and I’m just like, “Ugh! I’m going to be retired by then, I won’t even be able to use it to get to a meeting.” That process is just frustrating, but if you start to kind of open it up like a butterfly, then you can have this discussion about the greater good of a region and not just maybe one project. I know there’s been coverage about regional rail, but then they show a map, and it’s not very exciting, and that’s the discussion that happens. I’m wondering if you’re feeling the same way or if what I just said is completely crazy.

Sadie Graham: No. Listen, everybody’s grumpy about how long it takes to do these things and how much it costs. And I feel that pain. We’re definitely looking at it. One of the things we’re doing is this business case, all the development framework which is not only based on the economics of something but it’s a really meticulous way of evaluating different alternatives to one another. In the past, we planners have let the environmental review process do that for us, at least in California, to choose the preferred alternatives, and I disagree that that was what that process was meant to do. So we’re trying to set up this framework through this business case; after we have these universes of alternatives, to really be able to evaluate them upon these metrics: what are the goals, how do we want to serve them, and how do they line up? Eventually, it will be the cost/benefit ratio, operability, how are we going to fund it.

To your point about the Central Subway. Funding does come into play at some point. We all know that. Especially in California, in the way that we have our different transit agencies not really all working together, it’s inevitable at some point. But really, this business case alternative framework is to help us move through that process and move forward with decisions, so we’re not moving backwards. Picture it like a funnel to getting to the right alternative which will be both that program and then that project.

Jeff Wood: I think the grumpiness is about how long it would take to get stuff done, how much it’s going to cost, and whether it benefits the right people. A lot of the economic reporting on a Second Crossing talks about an “economic bonanza” — and I was like, “For whom?” Who does it benefit? I think that’s the frustrating part — we can build these systems, but how do we get to a point where it’s actually giving people opportunities to get to jobs that need that opportunity rather than folks that might not need it or giving landowners increases in property values that maybe should be captured in some form or fashion? We can talk about all these things. I guess 26-year-old me would have blogged about this and said, “This is an amazing thing and it’s going to do this and going to do this…” and then 40-year-old me is like “Ugh!”

Biden uses climate summit to reassure world U.S. is back