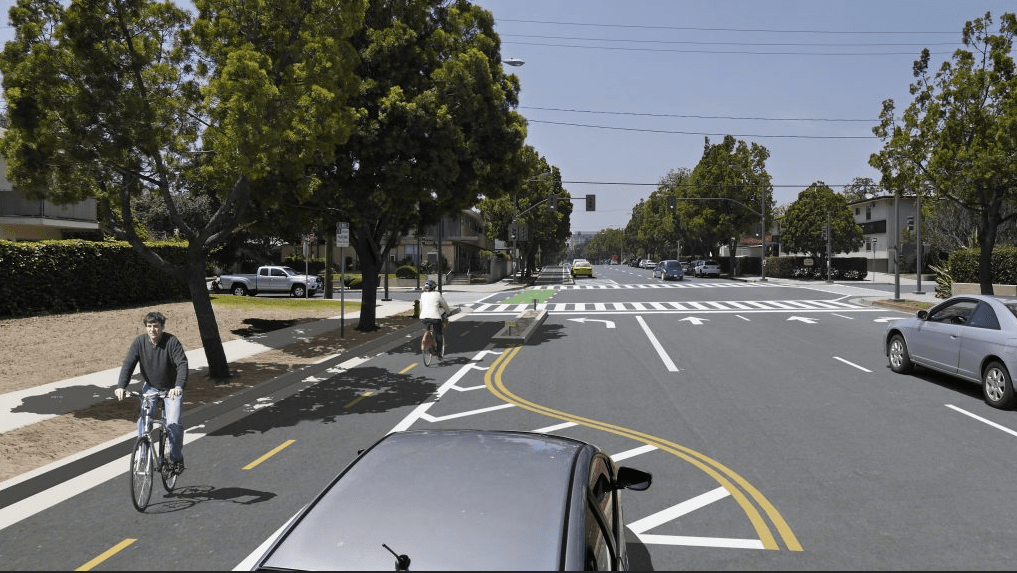 As it moves forward with plans to build its first protected bike lane, Pasadena got a reminder from the Pasadena Complete Streets Coalition to hold a steady course. In the past, the city has watered down plans for robust bike infrastructure in response to complaints about traffic being slowed down.

Why is slowing traffic a bad thing? What a lot of street designers and engineers seem to ignore is that if they are not willing to design a street that slows traffic, they are essentially encouraging vehicles to go faster. It’s probably not their intended outcome, however, especially on residential streets.

Nevertheless, according to its website, “Pasadena is dedicated to creating a city where people can safely and comfortably get around by biking, walking, and riding transit.” It is currently “embarking upon the final design” for its first protected bike lane, on Union Street.

John Lloyd, writing for the Pasadena Complete Streets Coalition, has an important reminder for city leaders about why good design should be prioritized over concerns about slower car traffic: Protected bike lanes are safer for everyone using them, not just pedestrians and bicyclists.

A 2019 study spanning thirteen years in twelve cities found that protected bike lanes dramatically reduced fatalities for all road users on the streets that added them.

Fatalities fell by over 38 percent in Chicago, 40 percent in Denver, nearly 50 percent in San Francisco, 60 percent in Seattle, and a whopping 75 percent in Portland, OR. What these cities had in common were protected bike lanes. The researchers concluded that:

“…building safe facilities for cyclists is one of the biggest factors in road safety for everyone. Bicycling infrastructure — specifically, separated and protected bike lanes — leads to fewer fatalities and better road-safety outcomes for all road users.”

How did protected bike lanes make a difference?

The study found the main reason for this was the traffic calming effect protected bike lanes have on all road users. With protected bike lane street designs, traffic speeds are lowered, so when collisions do occur, they are far less likely to be fatal, and this protects everyone. Let’s face it, people make mistakes, but designing streets for slower speeds means fewer of those mistakes result in people dying.

It might be a good idea for advocates everywhere to keep this study handy, and show it to planners when they face arguments that robust bicycle infrastructure is unnecessary because “nobody bikes.” That is a circular argument anyway–but what should matter more are the safety outcomes for everybody.