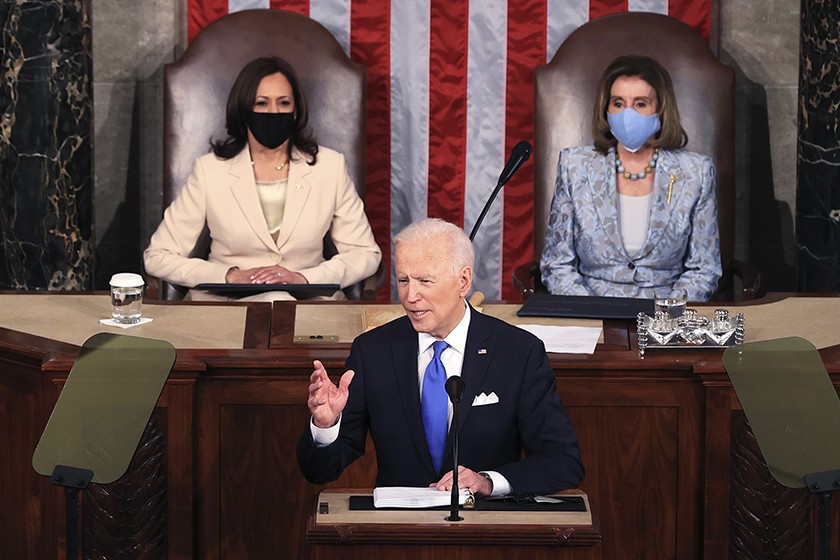 Like most Americans, the bulk of representatives and senators watched President Biden’s first address to Congress from their living rooms.

And it was unlike any other modern presidential speech to lawmakers seen before.

Long one of the most sought-after events in Washington, with 1,600 tickets (including some standing room only), the address was instead delivered address with just 200 people in the chamber due to the COVID-19 pandemic and ongoing security concerns at the Capitol.

And for the first time in history, a U.S. president was flanked on the dais by two women, Speaker Nancy Pelosi (D-San Francisco) and Vice President Kamala Harris, another Californian.

“Madam Speaker, Madam Vice President,” Biden said as he began his speech, before he was interrupted by applause from the chamber and a shout of joy from a female lawmaker.

“No president has ever said those words from this podium, and it’s about time,” Biden said.

The State of the Union — or, as a president’s first speech is called, a joint address to Congress — is a heavily orchestrated event meant as a platform for the sitting president to pitch his policy ideas to lawmakers. But with television cameras in the chamber, it’s also become his highest-profile appeal to the American people.

The speech occurred just short of Biden’s 100th day in office and much later than those of most modern presidents. He dedicated much of the early parts of his speech to talking about his early success of passing a massive economic aid bill and the economic emergency that still must be addressed to help Americans recover from the COVID-19 pandemic.

“While the setting tonight is familiar, this gathering is very different — a reminder of the extraordinary times we are in,” Biden said. “Throughout our history, presidents have come to this chamber to speak to the Congress, to the nation, and to the world. To declare war. To celebrate peace. To announce new plans and possibilities. Tonight, I come to talk about crisis — and opportunity.”

Most years, representatives stake out positions early in the day near the central aisle, where the cameras following the president into the chamber will catch their face as the president shakes their hand or slaps their back. This year, none were allowed into the chamber until just a few hours before the speech, and they all had distanced seats assigned by the House speaker’s office either in the chamber or in the public galleries up above, where guests normally sit.

Much of the normal pomp that surrounds the speech was absent. Most of the Supreme Court, Biden’s Cabinet and the diplomatic corps, didn’t attend. Applause seemed muted in the cavernous space, while voices carried further than normal. Still present was the split screen of members of the president’s party leaping out of their seats to give standing ovations to points they liked.

The social distancing meant few places to hide, and lawmakers walked in very aware their reactions would be on full display. There was little mindless scrolling on cellphones or eye rolls.

“People can see if you’re scowling or smiling, they can still see if you’re sleeping, unfortunately,” Sen. John Thune (R-N.D.) told reporters before the speech. “This is going to be a very unusual experience for everybody.”

Even the tension that normally marks the hours before the speech was gone. Rather than lawmakers giving tours to their guests, the halls of the Capitol held only the National Guard troops patrolling the grounds alongside Capitol Police officers walking single file to their break rooms.

The House is off this week, with most members at home in their districts or at the Republican policy retreat in Florida. The Senate voted earlier in the day. Statuary Hall, where dozens of television cameras are set up so lawmakers can give their local stations an immediate reaction to the speech, remained empty.

Pelosi said this week that the smaller crowd is due to the pandemic more than safety concerns at the Capitol, but the specter of the Jan. 6 attack on the Capitol remained in the increased security screenings that even members of Congress had to undergo.

Still, some representatives and senators were critical of the reduced numbers, with Sen. James Lankford (R-Okla.) saying “it is more drama than substance.”

Representatives and senators have had access to vaccines since December, but not every lawmaker has availed themselves to the shot. Dozens of representatives and senators are thought to still be not vaccinated, though because of privacy concerns it is unclear exactly who. Staff, including Capitol Police officers, and reporters in the chamber also have disparate access to vaccines.

Every attendee, even members of Congress, either had to provide proof of vaccination or was tested for the coronavirus in the 48 hours before the speech, another sign of the pandemic that still has the majority of Capitol Hill staffers working from home.