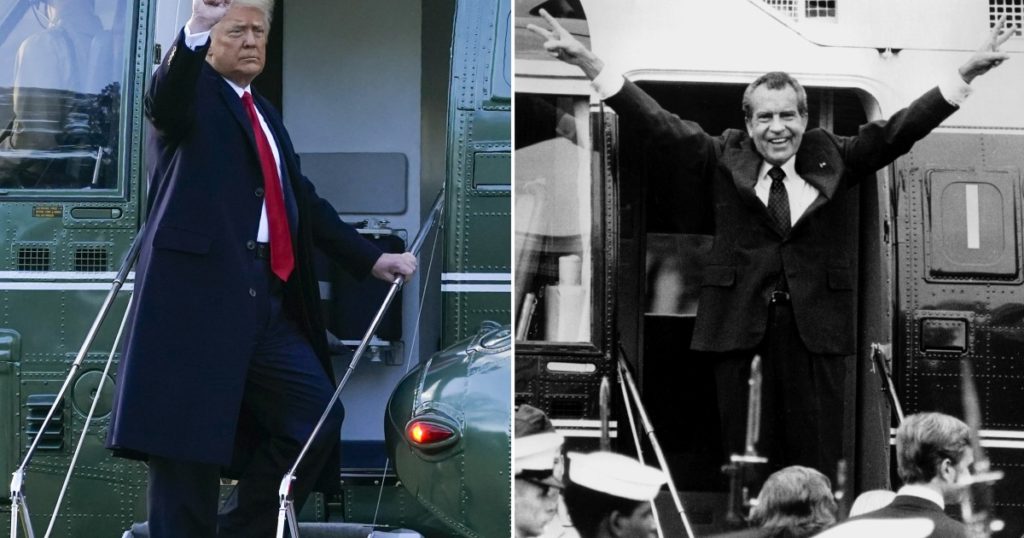 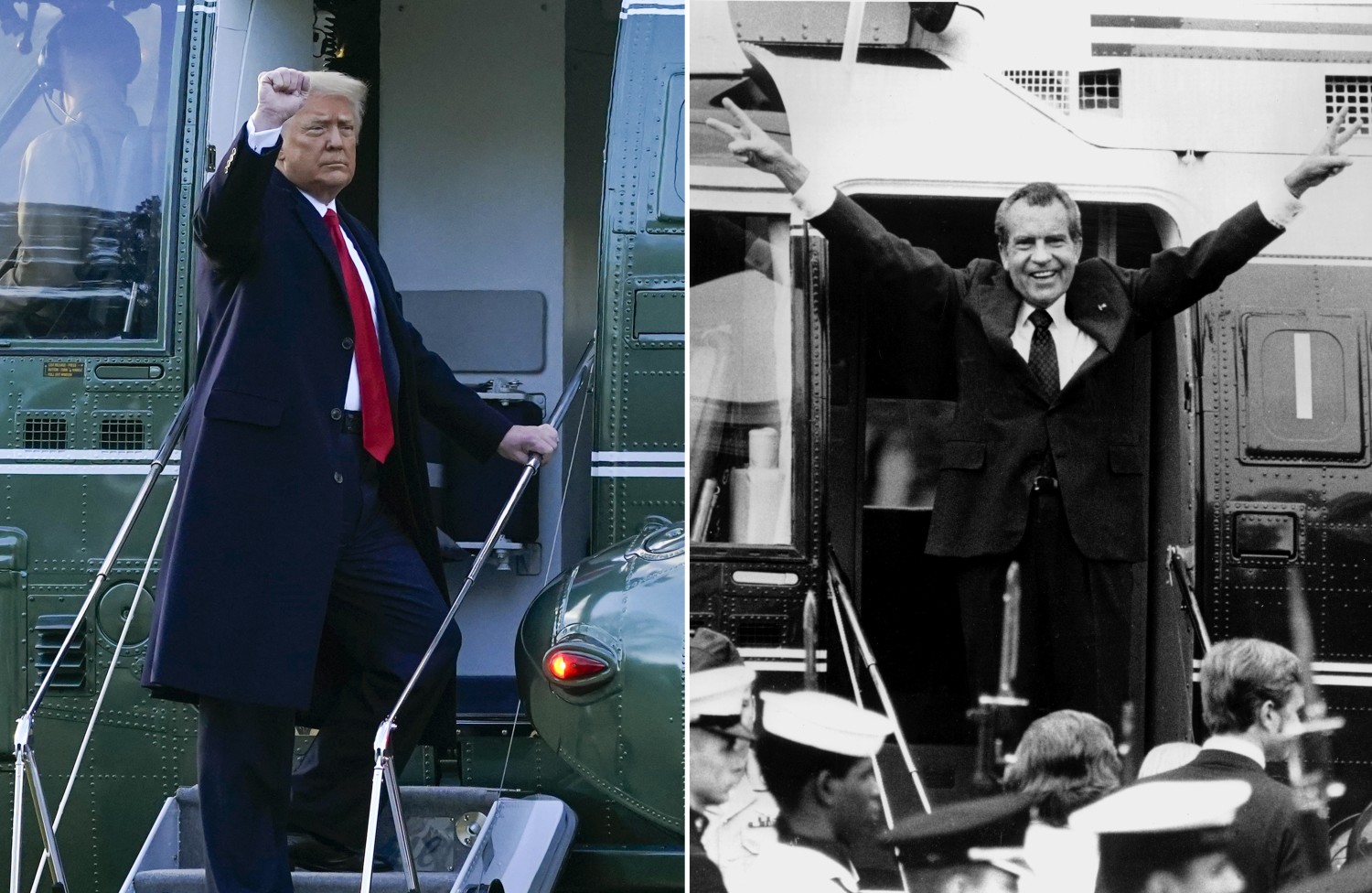 The last time a disgraced Republican left the White House, Ken Khachigian was right there with him.

Richard Nixon quit rather than face impeachment in the Watergate scandal, retreating to La Casa Pacifica, his seaside home in Orange County, where Khachigian helped the former president write his memoirs and launch a long march back to respectability.

“Boy, was that a sad time,” Khachigian said. He recalls arriving at the Coast Guard station in San Clemente just days after Nixon resigned in August 1974 to find the helipad that served Marine One, the presidential chopper, already converted to a makeshift tennis court.

Like a certain other recently departed president, Nixon faced legal problems, a financial mess and the continued rancor of a Democratic-run Congress. In Trump’s case, it is trial by the Senate on a charge of helping incite the deadly Jan. 6 attack on the U.S. Capitol.

But the comparison only goes so far. No one will ever mistake the nation’s 45th president for the deep thinker or foreign policy master that Nixon was.

Still, Khachigian agreed to offer Trump some advice on political rehabilitation, starting with perhaps the hardest thing for someone who craves attention the way other people need oxygen. “Shut up for a nice long period of time,” Khachigian suggested from his law office in San Clemente. “Just stay quiet.”

Khachigian, 76, went on to his own noteworthy political career as a speechwriter for President Reagan and wise man in numerous Republican campaigns. He was and remains unabashedly loyal to Nixon, who died in 1994, almost 20 years after becoming the only American president in history to resign the office.

Only those within its walls know the atmosphere at Mar-a-Lago, the ritzy Palm Beach, Fla., resort where Trump has retreated, or the fluctuating moods of the former president, now that he’s shorn of his social-media megaphone.

Khachigian recollects a businesslike atmosphere at Nixon’s hideaway, the former president in coat and tie as he put down the thoughts that would serve as the basis of his bestselling memoirs. He was focused, Khachigian said, on moving forward.

“We didn’t talk about Watergate,” he said of the concatenation of legal and ethical transgressions, stemming from a break-in at the Democratic National Committee headquarters, that resulted in Nixon’s resignation. “We didn’t re-plow old ground. We didn’t go over what he could have done differently.”

Nixon addressed Watergate in his memoir and, famously, in a pugilistic series of interviews with British TV host David Frost. (“I gave ‘em a sword. And they stuck it in, and they twisted it with relish.”)

That, Khachigian said, freed Nixon to move on and focus in public on other, more amenable topics.

There was a well-received 1978 appearance on French television — the overwhelming majority of those who called in offered words of encouragement or asked friendly questions — and a more mixed reception when Nixon spoke at England’s venerable Oxford Union. (A prolonged standing ovation inside, protesters and thumbtacks under his car tires as he departed.)

An avid reader, Nixon became a prolific writer, churning out nearly a dozen books in his post-presidency, offering pedagogic observations on political leadership and world affairs. His expertise was sought by members of both parties. By the time he died, Nixon was, if not widely revered or altogether rehabilitated, regarded as a serious elder statesman.

No less a partisan than President Clinton called for a posthumous truce of sorts, saying in a eulogy at Nixon’s funeral that it was time to stop judging him “on anything less than his entire life and career.”

Weighing the challenge facing Trump, Khachigian allowed as how it was unlikely he would suddenly transform himself into a Nixonian dispenser of deep policy wisdom. But, he went on, it’s likely Trump has a book in him about some of the accomplishments of his four years in office: tax cuts, conservative judicial appointments, an aggressive trade stance toward China, fostering new relationships in the Middle East.

The book should not, Khachigian emphasized, be a rehashing of old grievances or the ax-grinding that seemed to account for so many of Trump’s waking hours as president. “He needs to start figuring out how to be a serious participant, if he wants to, in political life and try to leave some of the bitterness aside,” he advised. “Save that for pillow talk with Melania,” the former first lady.

Which seems about as likely as Trump hosting a Biden-Harris reelection fundraiser in Mar-a-Lago’s Grand Ballroom.

The way the two ex-presidents handled electoral defeat is telling.

After the 1960 campaign, there was good reason to believe all manner of chicanery contributed to John F. Kennedy’s whisker-thin victory over Nixon. Some claim to this day the White House was stolen. Still, Nixon conceded the election and, as vice president and presiding officer of the Senate, certified Kennedy’s victory.

“In our campaigns,” Nixon told lawmakers, “no matter how hard they may be, no matter how close the election may turn out to be, those who lose accept the verdict and support those who win.”

Trump, of course, lost to Joe Biden by a wide margin, then wove a garish tapestry of lies he waved like a bloody shirt to inflame followers and undermine the new president, along with the country’s democracy.

Decades ago, Nixon dashed off a note to Trump, after former First Lady Pat Nixon caught the Manhattan real estate developer’s appearance on Phil Donahue’s show. “I did not see the program,” Nixon wrote, “but Mrs. Nixon told me you were great.”

Michael D’Antonio, a Trump biographer, told of visiting his New York office years before he was elected president and the two standing in front of the framed letter, signed “RMN.”

Trump said Nixon was wrong to leave the White House, D’Antonio wrote, no matter the good of the country. Trump’s belief foreshadowed his destructive actions: “He should have stayed and fought.”