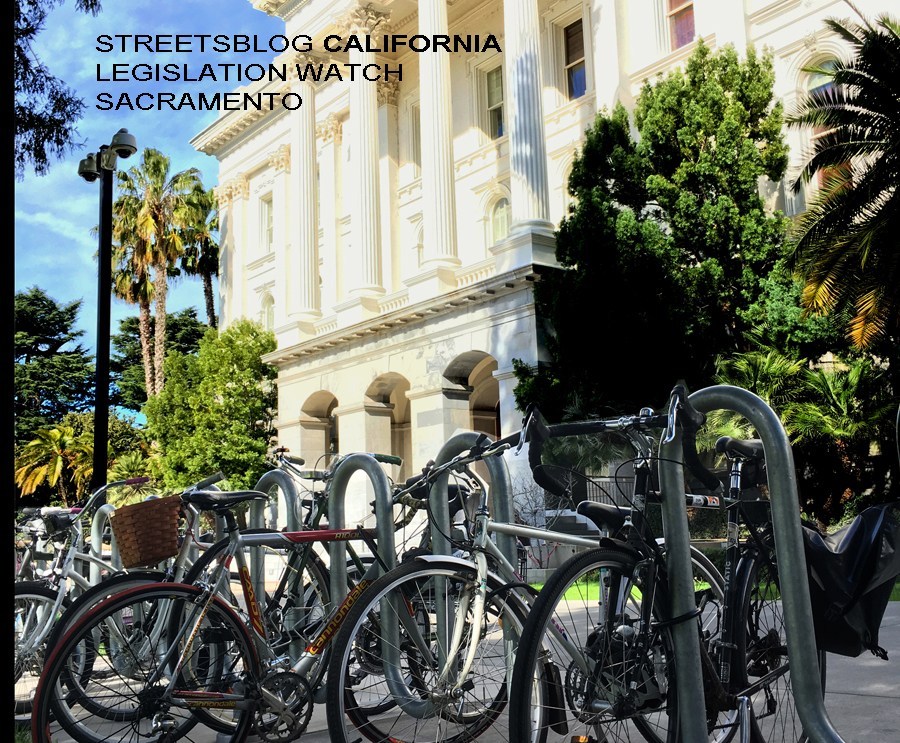 There are a lot of bills this session that address transit in one form or another. Many are still “spot bills,” the word used for placeholders that don’t yet contain anything specific and give little idea about what their authors intend. We will be keeping an eye on these as bill hearings begin and amendments begin to be made.

Below are a few of the main bills we’ll be watching this session:

Speeding up Bus Service on the Bay Bridge

A major chokepoint for transit in the Bay Area is crossing the bay itself. A few bridges and the BART tunnel currently are the only ways across, and talk of adding crossings is for the distant future. Increasing riders on transbay buses has the potential of solving a lot of problems at once: reducing car congestion on the bridge, reducing pressure on BART, reducing greenhouse gasses and other pollutants.

But to get more riders, you have to increase the number of buses and their reliability–right now, once transbay buses get on the bridge they are stuck in traffic with everyone else, subject to delays.

So Assemblymember Rob Bonta (D-Oakland) wanted to figure out how to fix this, but without dictating any specific solution to local transportation agencies. His bill, A.B. 455, sets a goal (increase bus service across the bridge to 45 mph) and a timeline (by January 2025); names the agencies responsible for solving the problem (Bay Area Toll Authority, Metropolitan Transportation Commission, Caltrans, Oakland DOT, transit operators, San Francisco County Transportation Authority, Alameda County Transportation Commission, and Contra Costa Transportation Authority); and then offers a solution if they can’t solve it. That is, if buses aren’t able to travel at 45 mph across the bridge regularly by January 2025, then the authorities must set aside one of the bridge’s lanes for transit only.

Getting a transit-only lane has been a holy grail for transit advocates for a while. Last year, Bonta introduced a bill to create one, but like most of last year’s session it was sidetracked by the pandemic. This time he’s back, focusing on the real goal, which is simply much better transbay service.

“If the agencies have a preference for solving the problem in some other way, that’s great,” said Carter Lavin of the Transbay Coalition, a sponsor of the bill. “If after the timeline is complete they haven’t solved it, then they could put in a bus lane to meet the goal.”

“This is a classic issue of governance,” he told Streetsblog. “There are so many people in so many jurisdictions that could benefit from speeding up bus service on that bridge – but no one is in charge of making it happen.”

The bill has several co-authors (Asm. Buffy Wicks, D-Berkeley, and Sen. Scott Wiener, D-San Francisco), and its sponsors, including the TransBay Coalition and SPUR, are hoping to garner even more support before it gets its first hearing. They are asking people to sign a petition to Assembly Transportation Committee Chair Laura Friedman to ask for her support.

Better transit reliability would benefit many people who can’t rely on the spotty timetables of the existing transbay service and don’t dare use the bus, even if they would prefer it to BART’s morning crushloads or the bridge’s packed traffic. More people on buses – which offer a lovely view from the bridge that many car drivers never even see – would help lighten traffic on the bridge.

There’s also the issue of transportation justice. “What kinds of jobs allow you to be fifteen minutes late to work several days a week?” asked Lavin. “If you don’t have a job that allows some leeway, then you either have to take an earlier bus – and can’t get your kids to school – or you find some other way to work.” There are already many transbay buses that use the bridge, some of them filling up at transit hubs and then hopping on the freeways to get there. Existing diamond lanes help speed them somewhat, but the jam once they’re on the bridge still slows them down.

Speeding up buses on the bridge, whether via a transit-only lane or some other means, would also make it possible to add more transbay bus service serving places that are not near BART.

The bill could be heard in the Assembly Transportation Committee as early as mid-March.

Currently, SF Muni and AC Transit in the Bay Area are authorized to use cameras on their buses to enforce parking violations of cars that block bus-only lanes. Two bills would extend that privilege to other transit providers.

Assemblymember Richard Bloom (D-Santa Monica) authored A.B. 917, which would allow every transit agency in the state to use camera enforcement, not only in bus-only lanes but also to enforce parking violations at bus stops.

Senator Josh Newman (D-Fullerton) has introduced S.B. 111, which would allow school buses to use video cameras to enforce the no-passing law.

Resistance to any kind of automatic camera traffic enforcement is usually intense, but this program has been working, and other methods have not been as successful. Details about privacy would have to be ironed out, and a common objection is that the cameras are just used to make money for the companies that provide them.

Those questions will have to be addressed when the bills are heard in their respective house committees in the coming month.