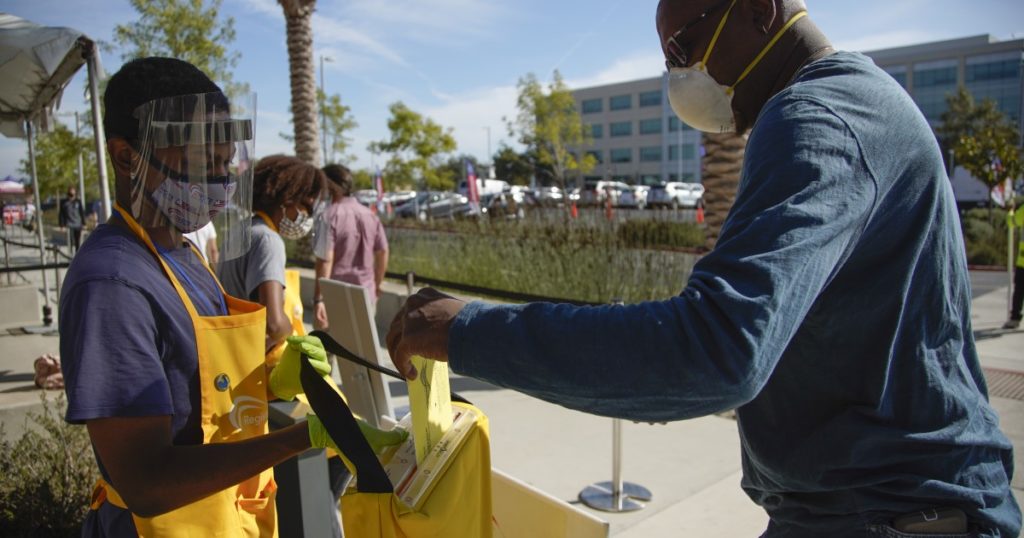 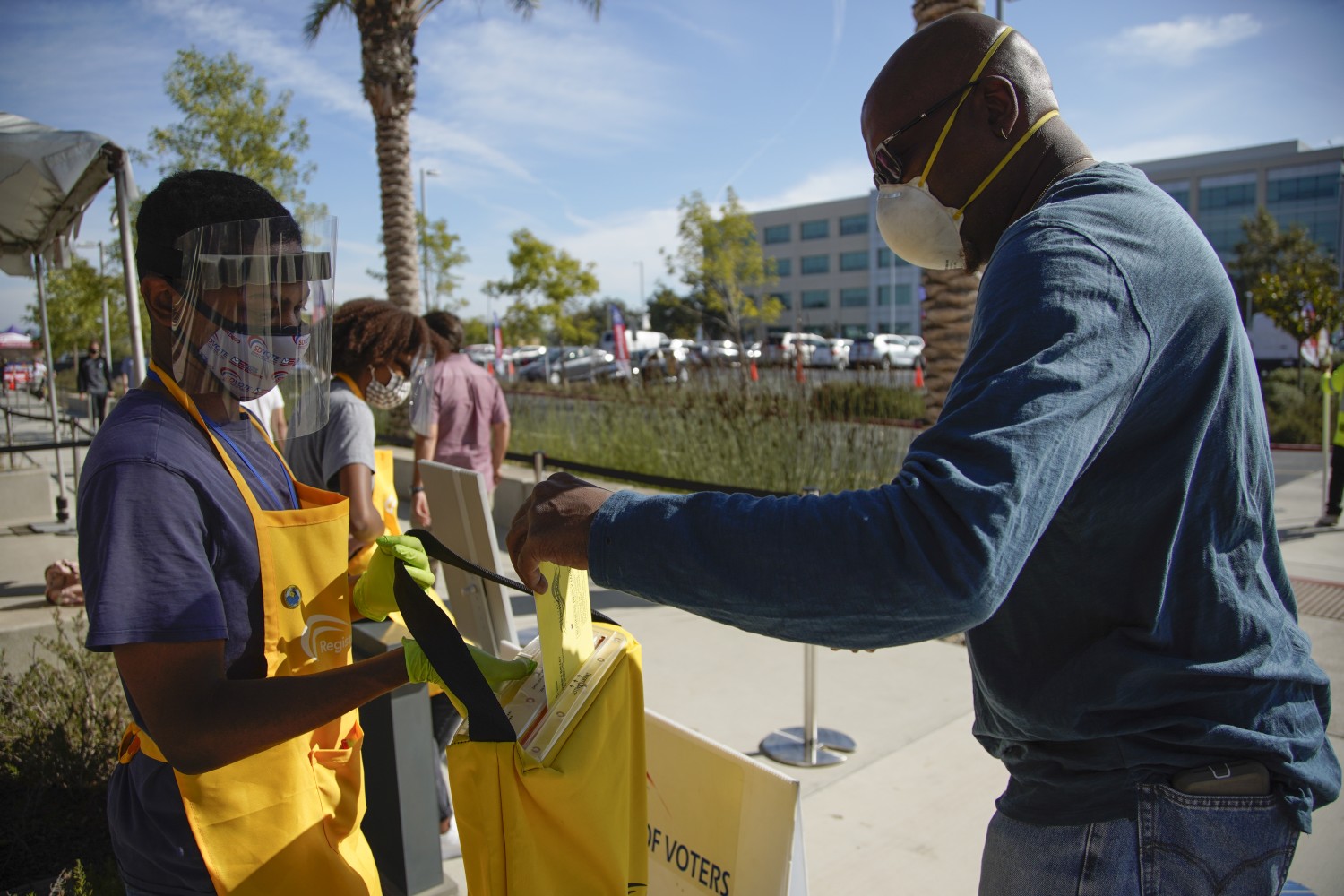 But this year’s participation by 70.8% of eligible voters may be even more historic due to the lower voting age. Since the passage of a constitutional amendment in 1971 to lower the voting age from 21 to 18, no California election has come close to turning out as many eligible voters.

“This was an election unlike any other in modern American history,” Secretary of State Alex Padilla said in a video posted online Friday afternoon. “And it would not have been possible without the contributions of elections officials and poll workers alike. Their work maintained the resiliency of our democracy during a global health crisis.”

As a share of registered voters, only the presidential elections of the 1960s and ‘70s saw a higher turnout of Californians. And in raw numbers of votes in November, no state came close: More than one in every 10 ballots in the nation was cast by a Californian. Estimates show more votes tallied in California than in 20 other states and the District of Columbia combined.

The statewide outcome was never in doubt at the top of the ticket. President-elect Joe Biden won 5.1 million votes more than President Trump in California, a larger margin than that by which Democrat Hillary Clinton bested Trump four years ago. Biden won 35 of the state’s 58 counties — amassing more than six times as many votes as Trump in San Francisco and edging out the incumbent president by 14 votes in rural Inyo County.

On Monday, a slate of 55 appointees to the electoral college will convene at the state Capitol to formally cast their votes for Biden. In all, Biden won states representing 306 electoral college votes to Trump’s 232 votes.

One small part of the November election did not come to a conclusion on Friday. In Butte County, north of Sacramento, a judge allowed elections officials to count 529 ballots discovered in a sealed drop box on the campus of CSU Chico — votes cast before the deadline on election day and that only have the potential to affect the outcome for a local ballot measure.

Presidential elections generally result in a higher turnout than statewide primaries or gubernatorial elections. Researchers said they hope to dig deeper into the November data to better understand the composition of California’s fall electorate by race, ethnicity, gender and age. For decades, the demographics of the state have diverged sharply from those who cast ballots — resulting in elections largely dominated by older white voters.

“This election definitely pushed everyone to a higher turnout,” said Mindy Romero, director of USC’s Center for Inclusive Democracy. “What we don’t yet know is what that really meant for historically underrepresented groups in the electorate.”

Few states have done more than California in recent years to expand opportunities for eligible citizens to vote. State leaders have created automatic voter registration at DMV offices; extended voter registration through election day; offered absentee voters more options in who can return their ballot; and pushed for counties to implement a far-reaching system that allows for early voting at a variety of community locations.

More ballots are probably counted here than in other states — often adding a few weeks to the tabulation process — as the result of California laws that extend the number of days a ballot can be received in the mail and give voters a chance to fix illegible or missing signatures on an absentee ballot envelope.

But no voting law was perhaps more significant in explaining November’s high turnout election as the pandemic-inspired decision to mail a ballot to each of California’s 22.3 million voters. Elections officials were concerned that a large number of in-person voters could overwhelm polling places that had to be redesigned to lessen the risk of COVID-19 infection.

“We looked out for our neighbors, our communities, our local elections officials. And our democracy is stronger for it,” Padilla said.

Final election results show almost 87% of the state’s 17,785,151 votes were cast somewhere other than a polling place or vote center. And almost 99.5% of those ballots were accepted, a historically low rate of rejection.

“Automatically mailing all registered voters ballots brought a degree of uniformity to California’s election that has been missing in recent years and made it easier to tell voters statewide what they should anticipate,” said Kim Alexander, president of the nonpartisan California Voter Foundation.

Processing and counting ballots lasted longer than usual, due to a one-time rule enacted by state lawmakers that allowed ballots postmarked by election day to be tallied if they were received by Nov. 20 — more than five times the normal grace period under California law. Though that unique rule change will expire at year’s end, the Legislature will consider an effort next year to continue mailing every voter a ballot.

A bill by Assemblyman Marc Berman (D-Palo Alto) would make permanent the mailing of ballots to all voters and require ballot tracking systems to be made available for all voters in future elections. Alexander said that other changes made for 2020, enacted to make this year’s reliance on remote voting easier, should also be extended.

“Going forward, we need to also ensure all Californians have equal access to early voting opportunities and official ballot drop boxes,” she said.

Though the presidential race attracted the most votes of any November contest, close behind was Proposition 15, a statewide ballot measure that unsuccessfully sought to raise business property taxes to help fund schools and local government services. It garnered more votes than any of the other 11 ballot measures, with 52% of voters rejecting the constitutional amendment.

The fewest votes in support or opposition to a statewide measure were for Proposition 25, a race in which a majority of voters overturned a 2018 law that sought to abolish cash bail in favor of allowing judges to make pre-trial detainment decisions.

In all, voters approved five of the 12 statewide propositions. On the local level, Californians were far more supportive of ballot measures seeking new taxes or borrowing. Election results compiled by the California Local Government Finance Almanac shows 198 of 260 local tax and bond measures were approved by voters — most of which were general city tax increases, requiring only a majority of votes to be enacted. Most school bonds proposed in communities across the state also passed.

There were 100 seats in the California Legislature on the fall ballot — all 80 seats in the Assembly and half of the 40-member Senate — but very few close contests. Only a half-dozen legislative races saw a margin of 5% or less between the two candidates; most were double-digit wins for incumbents. Of the 53 congressional races on the ballot, only three ended with the seat changing hands from one political party to another. All of those were defeated Democrats: Reps. Harley Rouda and Gil Cisneros in Orange County and T.J. Cox in Hanford.

Forty California counties saw registered voter turnout higher than the statewide average, with Sonoma County leading the state at almost 90.5% of all voters casting a ballot. Imperial County saw the lowest turnout with 67% of registered citizens participating. In Los Angeles County, ballots were cast by 74% of registered voters.

Romero noted that the last three election cycles in California — the 2016 presidential contest, the 2018 state elections and the primary and November contests this year — have all led to higher turnout than in previous years. She said while the trends look promising, continued outreach by voting rights organizations and campaigns will be necessary to reach younger voters and those in low-income communities, groups frequently underrepresented in California elections.

“I think we have a moment where we could continue this,” she said. “But the work has to be put in.”