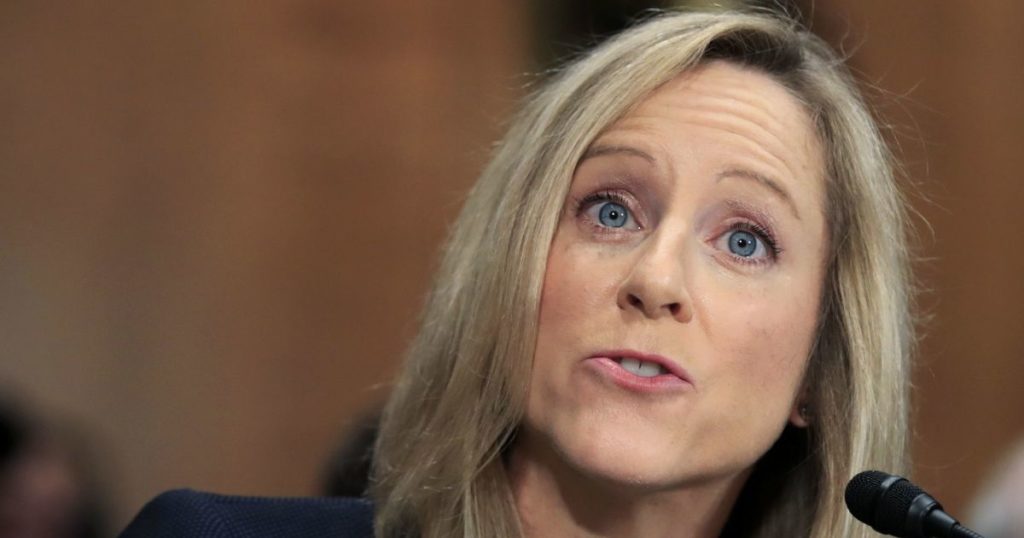 The Consumer Financial Protection Bureau made clear when it opened for business in 2011 that it would be “a cop on the beat” to protect people from unethical, abusive and illegal behavior on the part of financial institutions.

That cop spent much of the last four years waving at passing bankers and lenders from the doughnut shop.

Things are about to change.

These stats are misleading, however. Another key metric of the bureau’s effectiveness is how much money it pries out of companies that cross the line in their dealings with consumers.

In the bureau’s most active year under former President Obama, with 56 enforcement actions in 2015, it returned to consumers nearly $6 billion from settlements with businesses it oversaw.

In Kraninger’s most active year, total settlement cash returned to consumers fell precipitously to a fraction of the earlier amount — $783 million.

Then there’s the matter of fines being levied, as opposed to settlements. Settlements address matters of restitution, and fines can send a message to companies that bad behavior won’t stand.

In the 2020 fiscal year, which ran through September, the CFPB collected 34 fines worth a total $34 million.

All other fines were much smaller. Thirteen were for $10 or less. Ten were for just $1.

One of the companies that had to pay only 100 pennies was a Tennessee payday lender called Main Street Personal Finance that allegedly duped consumers with “deceptive finance charge disclosures.”

The CFPB cited Main Street’s “inability to pay” as a reason for the bargain-basement penalty. Some might argue that this was small consolation to the payday lender’s customers, whose own financial difficulties simply resulted in increased debt.

They’re alleged to have engaged in “unfair, deceptive and abusive acts and practices” related to “the illegal collection of loans that were void in whole or in part” under the laws of 17 states.

You don’t have to be an expert on the justice system to understand that there’s not much deterrence to bad behavior when punishments are a joke.

I reached out to the American Bankers Assn. for some industry perspective on the CFPB’s activities during the Trump years.

Jeff Sigmund, a spokesman for the organization, praised Kraninger’s “strong support for innovation and competition in the marketplace,” which can be read as appreciation for reduced regulatory oversight over the last four years.

Consumer advocates, meanwhile, were unequivocal in their perception that the bureau had become too chummy with companies it oversaw.

“The CFPB’s primary focus now is looking at things from a business perspective,” said Remington Gregg, a lawyer with the advocacy group Public Citizen. “Consumers have become a byproduct.”

“Kraninger and the political commissars that she and predecessor Mulvaney installed to oversee career staff slowed the CFPB’s efforts to protect consumers at the exact time she should have accelerated — while consumers faced the dual scourge of a pandemic emergency that also ravaged their family finances,” he told me.

Kraninger announced in 2019 that she was switching the focus of the CFPB. While enforcement actions would continue, she said, the bureau would concentrate on an educational role, “empowering consumers to help themselves, protect their own interests.”

That’s basically like the California Highway Patrol saying it will focus less on pulling people over speeding and more on telling people that speeding is wrong.

The CFPB’s marching orders are expected to change dramatically once Biden takes power and appoints a new director — one who, unlike Kraninger, actually has a background in consumer protection.

Among names being floated are Rep. Katie Porter (D-Irvine), a former consumer attorney, and Sen. Elizabeth Warren (D-Mass.), who came up with the idea for the CFPB in the first place.

Either would be great. But it seems unlikely they’d want to give up their higher-profile congressional gigs.

Also, with razor-thin margins in both chambers, Biden may be reluctant to raid that particular cookie jar in making appointments.

There’s talk of him possibly asking Obama’s CFPB director, Richard Cordray, to resume the job or turning to a prominent consumer champion — an attorney general, say — at the state level.

Regardless of whom Biden chooses, there’ll be a cop on the beat again.

High on the to-do list for the bureau, advocates say, is stepping up enforcement actions so businesses get the message that recess is over.

New protections for student borrowers are likely, I’m told, as well as a renewed focus on lower-income and minority communities that are often preyed upon by unscrupulous financial firms.

Most importantly, a leveling of the playing field is in the cards. Businesses that already treat people fairly have nothing to worry about.

Others will likely have to grow accustomed to shelling out more than a greenback for getting up to no good.